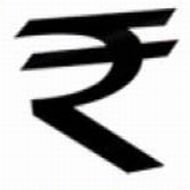 Now Indian Rupee has a new symbol and this is how it looks. This new symbol which has been shortlisted through a contest run by Finance Ministry of India. You can read about that Rupee design contest here. The basic aim of the new symbol is to provide the Indian rupee international recognition as the countryâ€™s economy exerts more influence in the global space, the unique sign will also help isolate the currency from the current abbreviation â€˜Rsâ€™ which is used by neighbouring Pakistan, Nepal and Sri Lanka.

The winning designers concept was based on the Tricolour and â€œarithmetic equivalenceâ€. While the white space between the two horizontal lines gives the impression of the national flag with the Ashok Chakra, the two bold parallel lines stand for â€˜equals toâ€™, representing balance in the economy, both within and with other economies of the world. The winning designer is an IIT post-graduate D Udaya Kumar.

Along with the announcement of the result, there have been a number of controversies as well. One of the RTI activist had revealed that the panel took less than 20 seconds to go through each of the design and analyze. This is what the activist revealed according to RTI Documents :

Keeping aside all the controversies, I am happy that there is a new symbol for Indian Rupee!