Back from watching this classic from Director Vijay…. Am proud that Kollyhood is producing more talented directors who are taking tamil cinema industry to high standards… Movie revolves around a father who is still a Kid and his daughter… The struggle a person to get back his daughter and how he give back his daughter for her well being…

Some scene that carried me away;

In terms of numbers it is 4 Rajini Kanth movies, 3 Kamal Hassan movies, 2 Ajith Kumar movies & 1 Vikram’s movie are on the top 10 grocers of Tamil Movies till date… 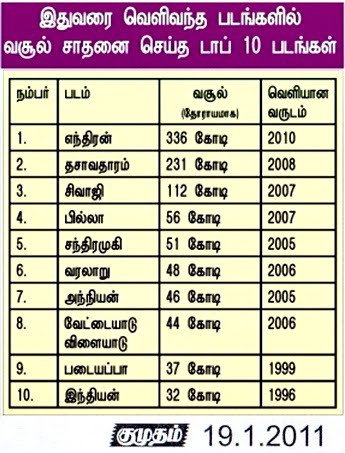 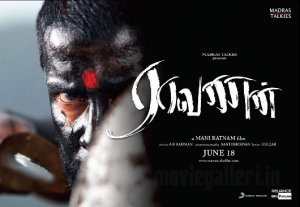 I wanted to make a post about this a while back but it took some time. Itz better late than never. As usual we grabbed tickets for Raavanan on the first day and the immediate response from my friends were negative. I personally liked the movie very much. But as days passed I was getting only one feed back that movie sucks. Also what made me red was people started criticizing Mani Rathnam like;

But what ever the critic may tell. You cant judge a person with one movie. We all must remember that he has re-defined Indian cinema & one more thing is movie is not that bad. But still I’m unable to crack what went wrong that most of the people didn’t like the movie.

For me Vikram, Karthik & Prabu have given a great performance. Coming back to the point on why I liked the movie is because of the songs, the camera work, stumble comedy & typical mani’s screen play. 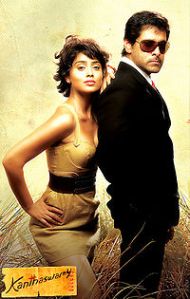 Watched Vikram starrer Kandasamy for second day and I personally think it is a well made movie. But I get mixed response from public. Vikram has done a fabulous job and special effects are superb. Kudos to Vikram, Susu Ganesan & Thota Dharani for the sets and Vikramâ€™s costume designs. Since lots of websites and magazines have reviewed the movie Iâ€™m not going to write the review about the movie. Instead Iâ€™m going to argue about the concept which the movie emphasizes.

Movie talks about the familiar concept where Rich gets Richer & Poor gets Poorer and the hero robs the entire surplus from the rich and hands over the poor. The point Iâ€™m going to argue is the way hero distributes the money. He creates a belief on people to write their difficulty on a piece of paper and tie it on a tree near a temple.

As known most of the request from people would be on money asking for daughterâ€™s marriage, sonâ€™s marriage, fathers operation etc. and our hero distributes the money to the needy. But I question this concept as problems are not one time and money related problems are constant.

Let us assume a case where hero offers Rs.60,000/- to a lady for her daughters marriage. Is that her final need? Then next time should would again write in a paper and tie it in a tree asking money for daughterâ€™s delivery expense and then grandchildâ€™s education and it continues. Also if we start helping people like this it is going to make them lazy.

Iâ€™ve many personal experience where in once I helped one of my gym master by giving him some money to participate in Mr.India tournament then in 2 weeks he asked for some money to repay some debts which he said he had got for his fathers treatment and it didnâ€™t end there within a month he asked for some more money to settle another debtor. But 3rd time I realized Iâ€™m not helping him instead I was pampering him.

So lesson I learned is if someone is in need show them the way to earn that money instead of offering that money to them.

To signoff the movie covers the same concept of SuperStar RajiniKanth starrer Sivaji where hero gets all the black money and constructs hospitals, education institutes etc and helps needy by Kind instead of offering money to the needy like in the movie Kandasamy.