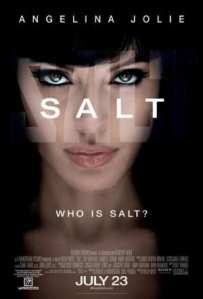 Watched SALT last weekend and enjoyed the movie a lot. Though I’m not a Fan of Angelina Jolie I went ahead and watched the movie because of the the Buzz created by the Trailers & I loved the trailers and I was waiting for long for the release of the movie.

Russian Spy Agency trains a bunch of Kids (between the age of 10 – 12) & immigrate them to US and make them join different American security Agencies. One of the SPY is Evelyn SALT(Angelina Jolie) & her boss is also a Russian Agent which is revealed only in the climax.

SALT completes her accomplished task and on going back she reaches a place where she finds all her childhood friends who were trained along with her. There she finds her husband being killed. She retaliates by killing everyone there.

Then she is taken to Kill the American President & when she nears to the President her American Agency Boss kills everyone & that is when he explains how he pushed for SALT to kill the president & other Russian Agents so that he can get a good name.

Finally Salt Kills her boss & gets arrested. While air-lifting her she explains things to FBI agent and he releases her hand cuffs & allows her to jump from the helicopter asking her to clean other agents too. Then we see SALT running through the woods & there ends the movie.

Movie has a good screenplay with lots of suspense & it is action packed. I’d give a thumbs up for the movie.