The sport has been symbol of Tamil tradition for a long time!!

Has anyone linked to ban of Jallikattu seen how these Bulls are taken care of???

Not sure where these so called animal lovers are when these animals are killed and served as beef??

These animals are openly smuggled to Kerela and being killed!!

There are lacks of deserted cow’s that eat garbage!!! How many are rescued and rehabilitated??

Also the judiciary which has no connect with emotions of people has passed a judgement which is only going to take people’s trust on Judiciary & Judges further down!!!

Finally we are not going to bow down easily!!! We will take every means to continue with our tradition and pride!!!

Got startled when I came across this tamil quote… The words used in the quote is almost non-existent in today’s modern tamil… But the message conveyed thousand years back is mind blowing!! Not sure where we lost our heritage!!! Not many Tamils know or realise that our own literature can help us in planning our career and personal life!!

Tamils those days spoke about importance of wealth, education, poverty & insult… These facts of life can be applied any time until the mankind exist!!!

What does Chennai mean? The question troubled Paris-based historian J B P More quite a lot. After painstaking research, he found the answer.

In his recently released book, titled ‘Origin and Foundation of Madras’, More says, “Chinapatnam and Chennapatnam were the other names for Madras used by Tamil and Telugu settlers in the area. Chennapatnam was ‘Tamilised’ as Chennai but the word didn’t mean anything in Tamil. It’s undoubtedly a Telugu word.”

Madraspatnam was derived from Medu Rasa Patnam, said More, who was in Chennai on Saturday to release his book. “When Nayak Venkatappa (a local chieftain) issued a grant (a portion of the area where subsequently Fort St George came up) in favour of the English in 1639, only Madraspatnam was mentioned in it. But during the 1640s, two new names for Madraspatnam or for the area inhabited by Tamils and Telugus around Fort St George seems to have come into existence. They were Chinapatnam and Chennapatnam,” he said.

Chinapatnam would have been the first name that would have come into existence in the Tamil-Telugu quarters to signify the Black Town of Madraspatnam. “‘Chenna’ in Telugu means fair and is not to be confused with the Tamil ‘Chinna’, which means small. In Tamil, ‘Chenna’ is meaningless,” said More.

He said in the Tamil Lexicon, the Tamil word ‘Cennai’ has been mentioned which would signify ‘a drum announcing religious procession of an idol’. More said there was no reference in documents and literature of the period to ‘Chennai’ as a drum.

This seems to be purely the work of a translator of the 19th century who had preferred to Tamilise the Telugu word ‘Chenna’ into ‘Chennai’ so it sounded more Tamil,” said More. “The word ‘Chennai’ seems to have been born to designate Madras town. Its origin is Telugu. There is nothing Tamil in it,” he added. 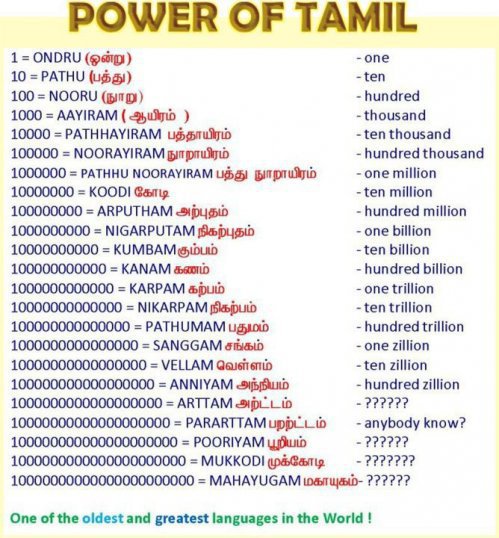 My only answer is I was never been treated like a 2nd class citizen by this country… Our home minister is a Tamilian… Infact for more than 2 decade Tamil Nadu had major chunk of portfolio in the Central Governments… Sri Lankan issue or Tamil Fisherman issue is not handled well must be accepted… But we must remember we have greater say in the central cabinet(DMK)… So, the truth is fellow are corrupt and they are not working for the cause of our brothers… If we ourselves ignore the cause of our own people tamilians… It is not reasonable blaming someone who is not linked to us in terms of language…

Though I was not convinced by my friends argument… He was not in a mindset of accept mine either… So, we decided to stop this without any conclusion…

Moral: Changing ones ideology is a difficult task or it is impossible…

Highly Spoken Languages in the world

After coming home I Googled and startled to know these facts.Â

So here is the list of languages and their rating.

Today I was watching Dasavataram where Kamal Hassan portrays 10 different roles. For long I wanted to write a blog about my favorite role but I forgot for some reason. Today I thought it would be right time to dedicate my favorite one.Â

Vincent Poovaragan portrays role of an illiterate Dalit who fights to uplift his community and an activist who fights form Mud Mafia. Dialogue delivery of this role is very powerful which has lots of punch lines, social message, affection, leadership messages etc. spoken in Tamil in Naragkoil lingo.

Â Who else could have justice to such a powerful role other than Kamal. This particular character fairs well in makeup / getup, dialogue delivery, characterization et more. I think Kamal can get an Oscar for this role alone.